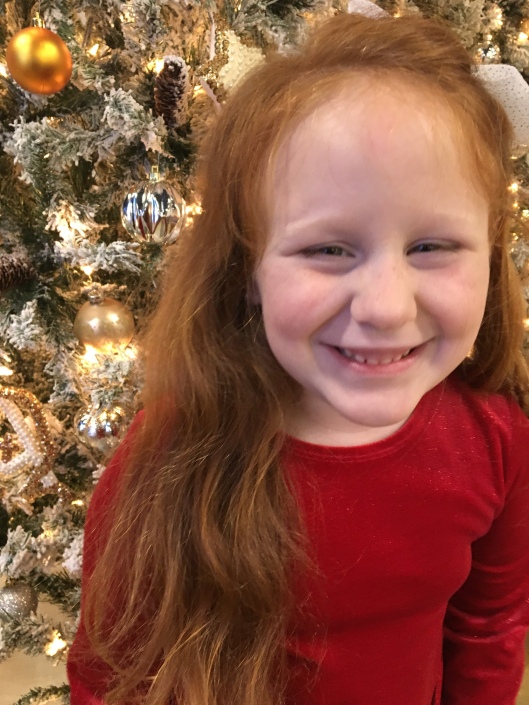 “What is the true meaning of Christmas?” Brooklyn has repeatedly asked me this season, usually as we are driving somewhere. I always say it’s the time we celebrate Jesus’ being born into this earth. It’s His birthday. “Jesus is the reason for the season!” I say happily.

But there is obviously so much more to the story. Christmas is the day we celebrate Jesus’s birth; but the real Christmas story actually began in the very beginning, before God created mankind.

When God created mankind, He gave us a free will, and for some inexplicable reason, in the midst of the beautiful garden in which He set Adam and Eve, He placed a forbidden tree. “Eat of any of the others, but not this one; eat from this one and you will die,” He essentially said.

Most everyone knows the story. The devil came in the form of a serpent and convinced them to eat it. At that moment, sin and death (and thus separation from God) entered this world.

Man needed a Savior, and God knew that he would need a Savior.

He had already made The Plan.

Why Jesus wasn’t born one or two generations from Adam, I don’t know. Why God waited 4,000 years for Jesus to be born of the virgin Mary, I don’t know.

But during those 4,000 years, God kept hope alive by sending many prophecies of a coming Savior. The exact number, I’m not sure: It could be from 108 to over 400. But, interestingly, in the 1950s mathematician Peter Stoner calculated that the odds of even EIGHT prophecies coming to pass in one person’s life was one in one hundred quadrillion!

The point is, about 2,000 years ago an angel appeared to a virgin named Mary and told her she was blessed and highly favored among women and would conceive and bear a Son named Jesus, the promised Savior. She was confused as to the logistics since she was a virgin, but the angel patiently explained that it would happen by the Holy Spirit who would come upon her.

To Mary’s great credit, she agreed to this plan (God did not “rape” Mary, as I saw one claim recently): “I am the servant of the Lord. May it be unto me according to your word.” Thus the seed of God was implanted into humanity, and there grew, and was born.

What a glorious day!

We don’t know exactly what day of the year it was, but we celebrate His birth on Christmas day.

It’s what Jesus did at the end of His time on earth that makes this a never-ending story. He became what no one else could: a perfect sacrifice for the sin of all mankind. Every person is born with this Adamic sin nature; but when we are born AGAIN, we become a partaker of GOD’S divine nature! We are made a new creation!

John 3:16 records Jesus’ summation of The Plan, saying that God loved the world so much that He sent His only Son, that whoever would believe in Him would have eternal life.

Eternal life. I’m very interested in that, you see, because I have a young daughter whose earthly life was cut short.

How does one receive eternal life? How is one born again into God’s kingdom, a kingdom of life and not death?

The apostle Paul wrote in Romans 10:9-10, “that if you confess with your mouth Jesus is Lord, and believe in your heart that God has raised Him from the dead, you will be saved, for with the heart one believes unto righteousness, and with the mouth confession is made unto salvation.”

Because Jesus came, lived perfectly in the face of temptation, suffered and died on the cross, was buried and subsequently resurrected, we can now have life by believing in Him. Through Jesus’ resurrection, we have resurrection—first of our spirit, then one day our body.

He was the first fruit of many. The never-ending story of life and hope.

Because of this never-ending story of Christmas, I have hope. I have hope for eternal life, and I also have hope that I will see my beloved daughter again, because she believed in Jesus and what He did for her.

Because of this never-ending story, I write this today so you can have that hope, then you can share this same hope with your loved ones so that we never have to experience eternal separation from the God Who Saves or from those we love.

6 thoughts on “Christmas: The Never-Ending Story”